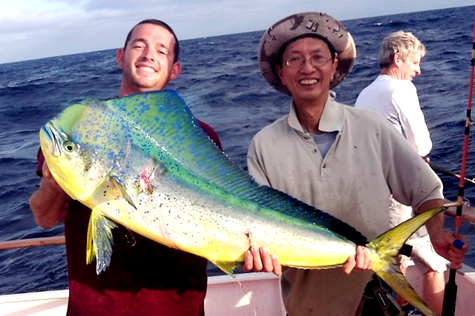 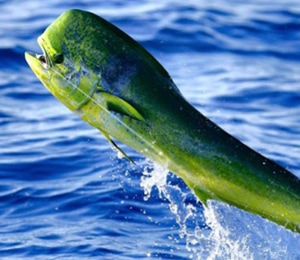 Found worldwide in tropical and warm temperate seas, the dolphinfish is pelagic, schooling, and migratory. Though occasionally caught from an ocean pier, it is basically a deep-water species, inhabiting the surface of the open ocean. The dolphinfish is a distinctive fish, both for its shape and its colors. Though it is among the most colorful fish in the sea, the colors are quite variable and defy an accurate, simple description. Generally, when the fish is alive in the water, the dolphin is rich iridescent blue or blue green dorsally; gold, bluish gold, or silvery gold on the lower flanks; and silvery white or yellow on the belly. The sides are sprinkled with a mixture of dark and light spots, ranging from black or blue to golden. The dorsal fin is rich blue, and the anal fin is golden or silvery. The other fins are generally golden-yellow, edged with blue. When removed from the water, the colors fluctuate between blue, green, and yellow. After death the fish usually turns uniformly yellow or silvery gray.
In addition to being a highly rated game fish, the dolphin is a delicious food fish. It is referred to as the “dolphinfish” to distinguish it from the dolphin of the porpoise family, which is a mammal and in no way related.